This is a portrait of Duncan Grant (1885-1978), who was a British artist and central figure in the Bloomsbury Group. I’ve always been a fan of his and that whole artsy, wild Bloomsbury group. They seemed to live exactly as they chose and defied quite a lot of conventions. Duncan was openly gay and loved by many, including the economist John Maynard Keynes and artist Vanessa Bell (Virginia Woolf’s sister) who bore him a daughter and with whom he lived for 40 years until her death in 1961. I tried to capture something of his dreamy beauty, inspired by an old black and white photo and some of his own self-portraits.

I painted this using very traditional portrait methods in layers of glazes over a monochromatic underpainting. This technique creates a great deal of depth although it can also create some variance in the surface gloss as is often seen in antique “ancestor portraits”. I liked how this effect added to a vintage look although it made the painting quite difficult to photograph. 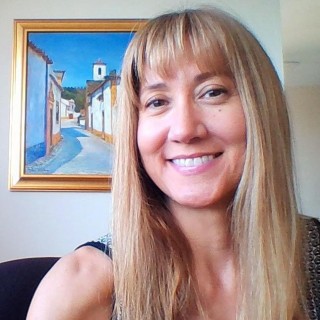 I have been drawing and making art in some form since I was four years old. I was born in Washington DC but, as the daughter of an American diplomat, I spent much of my childhood in Japan, Korea, and Hawaii. I studied art at Parsons School of Design and afterwards traveled to Europe to learn from the masterpieces in the great museums of London, Paris, Rome and Florence. I studied oil painting at a private atelier in Lisbon and had my first solo exhibit there. I currently reside in Arlington Virginia, just across the river from Washington DC. I feel art is a never ending journey of exploration and discovery. I am continually astonished by the beauty in this world and I love sharing this sense of wonder in paint.